Bees and wasps are the stinging insects of most concern in New Jersey. Found on every continent except Antarctica and in all environments with flowering plants, bees are nature’s greatest pollinators and wasps, which feed on other insects, are nature’s pest controllers. Both are beneficial insects that because of their stinging behavior can pose a serious threat to humans. Learn more about bee and wasp identification and behavior.

Carpenter Bee. Often mistaken for bumble bees because of their large size and similar black and yellow striped markings, carpenter bees are 1 to 1 1/2 inches long with a shiny abdomen instead of a bee’s typical hairy abdomen. Solitary insects, carpenter bees are wood destroyers, tunneling into soft outdoor wood to lay their eggs.

Their presence is revealed by the perfectly circular 1/2-inch diameter holes they leave in fascia boards, porches, decks, siding, sheds, even picnic tables. Living in mating pairs, only the usually docile female carpenter bees have stingers.

Stingerless males, however, are highly aggressive and can be a considerable nuisance dive bombing anyone who comes too close to the nest. Because of their habit of returning to the same site year after year, carpenter bees can cause serious damage to wood structures. Find out more about carpenter bees in our wood destroying insect section.

Ground Bee. Several species of bees build their nests in the ground, but the two of most concern to New Jersey residents and business owners are the usually docile bumble bee and the highly annoying sweat bee.

The Bumble Bee measures about 3/4 to 1 1/2 inches long. Bumble bees are one of New Jersey’s largest bee species and considered a ground bee. Hairy with distinctive black and yellow coloration, bumble bees have a round, robust appearance and buzz loudly when disturbed.

Frequent garden visitors, bumble bees collect pollen and nectar to produce a stored food called “bee bread” that they feed to developing offspring. Living in large social colonies underground, bumble bees can be a problem if they build their nests in garden or lawn areas frequented by people.

Occasionally, these bees invade buildings to nest in soffits or attics. Bumble bees are docile unless provoked or their nest is threatened. They are a problem only when nests are built in trafficked areas.

Halictid (Sweat) Bees are brightly colored. The halictid or “sweat” bee is the most problematic ground-dwelling bee for humans. Just 1/4 to 1/2 inch long, these tiny bees are a distinctive shiny metallic black and green color.

A persistent summer pest, halictid bees hover around humans, landing on skin to gather sweat droplets. They will sting if startled or swatted, although stings are considered minor. More of a nuisance than a threat, their persistent hovering can be upsetting at outdoor events.

Honey Bee. A beneficial insect protected by law, honey bees are 1/2 inch long and covered in dense short golden hairs with distinctive brown bands striping the abdomen. Vital agricultural helpmates, these prolific pollinators collect nectar and pollen from flowering plants, using it to create honey to nourish their young and sustain themselves through the winter. Honey bees live in massive colonies that may house hundreds of thousands of individuals.

They build wax-comb hives in tree hollows but may also colonize attics, chimneys, under siding or inside wall voids. Unlike other bees and wasps, honey bee colonies do not die out over the winter. Honey bees over-winter in their hives subsisting on stored honey.

When honey bees nest in inhabited spaces, they not only present a serious stinging risk to humans but dripping honey can permanently stain ceilings and walls and attract problem pests like ants, cockroaches and flies. Honey bees are protected by law and so cannot be eradicated by a pest control company, but a qualified beekeeper can relocate the bees and remove the hive. To avoid serious secondary pest infestations, the affected area should be professionally cleaned.

Hornets are extremely aggressive with a very painful sting. Loud vibrating sounds from lawn mowers or leaf blowers can trigger swarming behavior and dangerous stinging attacks. Multiple hornet stings can be deadly even to those who are not allergic.

The Bald-Faced Hornet also called the white-faced hornet for the unique white markings on its head, is black and about 7/8 inch long. Bald-faced hornets are best known for their unique aerial nests, the large, gray, football-shaped paper nests found hanging from high tree branches. While bald-faced hornets have little interest in humans, they are aggressive protectors and will swarm and sting repeatedly if provoked.

Wasp. There are more than 100,000 species of wasp. Varying in size and coloration, wasps are generally smooth-bodied with little to no hair. Hornets and yellow jackets, two of the most aggressive wasp species, live in huge social colonies, but many wasps like paper wasps and cicada killers are solitary, living individually or in groups with no social structure. Predatory insects, wasps feed primarily on other insects. Depending on species, wasps may nest in abandoned underground burrows, sheltered tree cavities, under eaves, in attics or garages, in wall voids or they may build aerial nests.

Unlike bees, wasps have straight stingers and can sting multiple times, making them a serious health threat, even to the non-allergic. Attracted by bright colored clothing and perfume scents and often nesting in close proximity to humans, wasps can be a serious problem at outdoor gatherings, particularly in autumn when they become highly aggressive.

Wasp colonies die in winter except for a fertilized queen who winters deep inside the hive or underground. Hives are abandoned when the colony dies in the fall and new hives built as eggs hatch and mature in spring.

The Paper Wasp is one of the most common problem wasps for home and business owners, the yellow and brown striped paper wasp has a slender 1-inch long body with a thin waist, tapered abdomen and long, trailing legs. Avid predators, paper wasps feed on insects, spiders and caterpillars. Paper wasps mix chewed wood fibers with saliva to create unique round, gray, papery nests that hang from a narrow stalk much like an upside-down umbrella.

Nests consist of a single exposed paper comb with as many as 100 cells visible; however, most nests are smaller, containing just a dozen or so cells. The dark heads of larvae can sometimes be seen in inhabited cells. Paper wasps typically build their nests in well-sheltered spaces including under eaves and roof peaks, underneath porches and decks, and inside grills and electrical boxes but may invade crawl spaces or attics. These solitary wasps have no social structure but typically live and build nests in small groups. Adults can often be seen resting on the surface of the comb. Paper wasps are aggressive when provoked and have a vicious sting.

Cicada Killer wasps are known for their monstrous size; up to 2 inches in length, cicada killer wasps often cause alarm. However, these gentle giants are not easily provoked and rarely attack humans.

Feeding primarily on sap and nectar, cicada killer wasps hunt cicadas which they seal into egg cells as food for growing larvae. Solitary insects, these wasps nest underground in dry, soft soil where vegetation is sparse.

Their penchant for burrowing in sand traps can make them a nuisance on golf courses. If bothered, their sting is painful.

The Yellow Jacket is a stocky, black and yellow wasp about 1/2 inch long. Yellow jackets live in huge social colonies. Yellow jackets build massive underground nests harboring thousands of individuals but may also build their layered, papery combs in the attics or wall voids of buildings.

Feeding primarily on insects and spiders, yellow jackets also seek out sugars and can be a serious summer pest as they forage in trash receptacles or crawl into soda cans. Quick to swarm and aggressive repeat stingers, yellow jackets are most violent in late summer and are responsible for most life-threatening stinging attacks in the United States.

Protect Your NJ Home or Business from Stinging Insects

Stinging insects can be a serious problem for home and business owners. If you notice bees or wasps repeatedly flying in or out of an area or begin to find them inside your home, a bee or wasp nest is likely located nearby. Contact the Allison Pest Control professionals immediately. The potential danger from stinging attacks makes bee and wasp nest removal a job for experienced professional pest control experts.

Commercial businesses and properties have many options when it comes to bee and wasp treatment and hive removal. Ask your sales representative about services tailored to your specific stinging insect needs today or get a free pest inspection and prices. 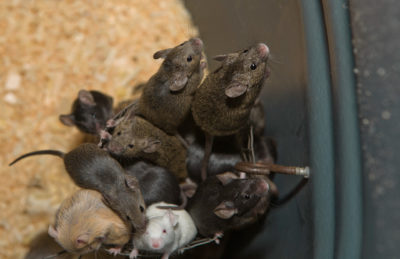 What to Know About the House Mouse Part Two

The CDC: Which Diseases Are Directly Transmitted by Rodents?

Where Do Spiders Go In Winter?

When temperatures drop outside, you might not see as many spiders around. Do they die from the cold, or are they able to...